THIS IS A PREMIUM PRODUCT, FABRIC MADE FROM 100% ORGANIC COTTON YARN, FITTED WITH ORIGINAL YKK ZIPPERS & SPECIALLY DESIGNED TO BE WINDPROOF.

This Comfortable, Windproof, Warm yet breathable, Psychedelic Graphic Design Printed Symbolic Hoodie / Jacket will keep reminding you and others how ShivaShakti are Inseparable since eternity. 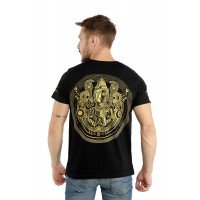